A sweltering summer night, sometime in the summer of 2009, a group of individuals conspired to meet together on 50 Lawrence Street. The city: Leominster. The state: Inconsequential. SF had learned that this musical foray was going to transpire, via an internet service grown popular and known know as “the facebook.” AA had notified SF of the peculiar happening between himself and SS. The two had previously met through a website, it’s name: Inconsequential. For over a year, the two would meet in this Lawrencian basement and mash their musical makeup together, until a pretty girl of a song was churned out. At least in terms of bass and percussion. After several unsuccessful tryouts with guitar practitioners, the two were left dumbfounded. Where to turn? Well why not call on a long past, childhood friend to see what the cut of his sonic gib might be? 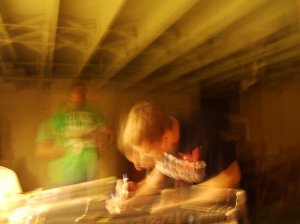 SF had returned from the arid shores of Arizona and was hungry as ever to join an already developed band. Too old to start something organically, at least too old in his own 26 year old eyes, AA had emailed SF through the already mentioned FB and SF’s creative tingle bone was stroked. On this hot August night, SF ended up at this Lawrencian basement and joined in with the others. SF had previously jammed with AA here, but these get togethers were loose, unfocused, and the occasional little mermaid cover jingle would show itself. AA’s parents were often annoyed of this random noise and the sessions were often cut short, but laughs did ensue, promising something more meaningful for the future.

Skip ahead from 2009 to December of 2009. A few rough cuts had been assembled and the band nervously took the stage at the Lucky Dog in Worcester. The same stage the Stones had once graced, as they warmed up for a much larger gig at the nearby Centrum. At this time SF was struggling with a raw, trebly, solid state sound, beamed from his Fender 212 amp. AA had really only ever played one show in a band setting before and was clearly in a strange headspace before going on. SS seemed confident, but rightly so, as he had written all of the songs. How would the audience react to this all instrumental trio? Would it bore them or would their heads bob like ostriches in heat? This not knowing, added to the nervous behaviors, that were dulled by ales and straight whiskey shots. A large smattering of family and friends appeared at this show, curious to see what this group “Miranda” was really all about. Would they sing songs about them? Would they represent their families in the most honorary way? Or would they witness a side of these band members that they previously were unaware of? Too many questions as this band of 3 stalked onto the stage. The sound guy was high and resembled a grungier Ryan Gosling. The show went off and was a success, at least as good as these songs were going to sound in their earliest of incarnations. End Chapter 1.

This is a good article that really makes it known that live concerts on demand is fastly approaching. I’ll predict that in 20 years bands will play “live shows” in front of green screens and each user will be able to program their very own backdrop. Then popular music will totally be reduced to an all out gimmick.

But until then it seems that we will be able to stream bands like U2 straight from youtube in real time. I think this is a cool feature and I wouldn’t be surprised if bands put some kind of access code on their physical cds which will allow listeners one free live show to be viewed online.

People will of course want to see their favorites in the flesh, but for someone that lacks the time/money (mostly money) this will put a renewed interest in physical cds, art work, and presentation in general.

Or in let’s say 2100 bands will start to clone themselves and you will be the director of your own music video/live show. Allowing each user the unique ability to hear any song they want, even with the option of on demand improvisation! This will be the complete fusion of Rockband and real live rock bands.